How To Capitalize And Thrive In The Music Industry. Insights on Making Hit Music for TV, Film, Ads.

The PMI Atlanta Entertainment Forum is focused on expanding knowledge and appreciation of Project Management and its benefits in unconventional fields by providing informational, educational, and networking events for individuals in various roles in the entertainment industry.

An intimate discussion about the techniques and strategies required to create hit songs and instrumentals for various media. 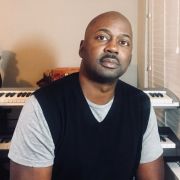 Eric Campbell is a songwriter, producer and multi-instrumentalist. He writes songs in numerous genres. Eric began studying music at the age of 6, and by the time he was 12 years old, he had gained proficiency in the piano, the drums, the violin and the saxophone. Advised by his parents to play it safe, Eric started a career in IT Project Management. However, after realizing that he couldn't be successful at both careers, he relocated to Atlanta and dove into music full time. His music has been heard on dozens of TV shows across numerous networks including BET, OWN, BRAVO, ABC, NBC and more. Recent placements include songs with Musiq Soulchild, Bootsy Collins, Jekalyn Carr and Roshon Fegan.

In 2016, he got the chance of lifetime - to join the music team of the hit show Greenleaf (on Oprah's OWN network). For the 2nd season he served as the vocal producer and wrote 2 original songs which aired during the season and were placed on the season 2 soundtrack (released on RCA Inspiration). This soundtrack won an NAACP Image Award and was nominated for a Stellar Award (The gospel industry's highest honor) In 2017, he released his first book, 'Easy Piano for Songwriters and Producers'. The book is available in ebook and paperback formats on Amazon. The ebook consistently stays in the top 20 for piano ebooks on Amazon. Eric spends each day writing instrumentals and songs for publishers and private clients.

Forums no longer accept cash registrations at the door.  Please register in advance.

We are no longer accepting registration for this event

PMI Atlanta, made up of over 4,000 members, is located in a large geographic area serving project managers all over North Georgia and metro Atlanta.

Not a member? Apply Today!